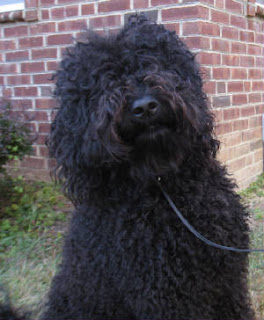 When I first considered breeding Claire to a beautiful European dog who I saw in Paris at the World Dog Show, I assumed that I would have frozen semen imported from my chosen stud dog and delivered to a canine cryo facility in North America to patiently await Claire’s coming into season. The further I got into Frozen AI, the less likely it seemed that it will work for me.
·         FCI frowns on AI breedings for bitches that have not yet produced a litter through live cover.
o       ARTIFICIAL INSEMINATION
13. Dogs should be able to reproduce naturally. Artificial insemination should not be used on animals which have not reproduced naturally before. Exceptions can be made by the national canine organisations to improve the health of the breed, for the welfare of the bitch or to preserve or increase the genetic pool within the breed.
While I feel that the case can definitely be made that this breeding will increase the genetic pool within the breed and definitely within North America, this determination is out of my hands.
·         The very short window of frozen semen viability (12 hours) requires careful progesterone testing, surgical implantation, and lowered fertility rates.
·         The cost for collecting, freezing, and shipping an International semen shipment is about $1,600 - $2,000, enough to buy me a plane ticket and a visit to an amazing country that I've never seen. (As it turned out, this estimate was very low. As I also had to pay for the courier fees and the container to be returned to Switzerland, the total was about $2,700)
·         The European paperwork feels daunting to me.
Eventually I realized that it may be cheaper and easier to take Claire to Switzerland for natural breeding. This would give me the chance to have several live covers instead of the singular breeding that I would have with frozen semen.
Problems with flying with Claire include:
·         Inability to plan an expensive International flight ahead of time due to the need to wait until Claire is in season. Ideally I will do at least 2 progesterone tests here to assure me that her heat is progressing to ovulation, and then fly to Switzerland for at least two covers. Hopefully she will be ready to breed when we arrive; otherwise we will be waiting days for her to be ready.
·         Limited airports that fly straight through to Switzerland from the US.
·         Expense of storing crate at airport, traveling by train or renting a car, staying in Switzerland for several days, dealing with a foreign language that I don’t speak, read or understand while caring for a dog in standing heat.
·         Stress on Claire created by 9 hours of flying to a foreign country.
·         Additional veterinary visits in Switzerland for progesterone testing and health certificate to get Claire back into the US
·         Paperwork is still daunting!
At this point, I feel overwhelmed at the trip and am back to wanting to keep my dog comfortably at home and try frozen semen. Dr Gavotte’s technique of trans-cervical insemination does not require the unsettling operation of a surgical implantation and he has a facility in his cryo network in Switzerland. The FCI requirement for a natural first breeding affects the stud dog owner, who I assume would need special permission from the SCS to allow the dog to be collected and shipped. In the US and Canada, which are not FCI countries, there is no such requirement, but FCI countries all follow FCI rules. I wish I had more experience with European kennel clubs to know whether we would be granted permission for an exception. By using the stud dog that I have chosen, a line of Barbet that has not yet been imported into North America will be available to help with the health and genetic diversity of Barbet breeding programs. Questions, questions.
I think we may be packing our suitcases after all.
Posted by HTF at 7:31 PM No comments:

Sheep for the Spring

For a long time I have wanted to have a few sheep on our property to help with the grass on the more hilly areas. Originally I was interested in the Jacob Sheep; a double horned goat type sheep with a striking black and white fleece. In more recent years, I find that I like large sheep with a classic look, a short level neck, long wool, and an interesting history. Last month we went to visit a farm in West Virginia where they raise rare Wensleydale sheep. We had a very enjoyable day learning about the British artificial insemination program used to breed the sheep.

Last weekend I went to the West Virginia Fiber Festival where I found another breed of sheep that I think will be the perfect addition! Leicester Longwool sheep have a fascinating history as the original sheep kept by George Washington. Colonial Williamsburg began an important breeding program to bring the dwindling breed back to prominence in the United States. Although still very rare, the Leicester Longwool is maintained by many owners who shear and spin their fleece into gorgeous yarns.

Both the Wensleydale and Leicester Sheep look like Barbet! They have long fleece that forms the same kind of curled strands as the dogs. Now all I need is some fence, then to wait for a few wethers that I can raise in the spring. 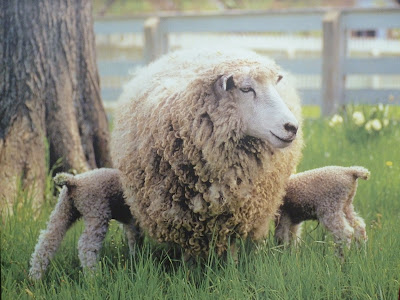 Preparing for our trip to Europe! 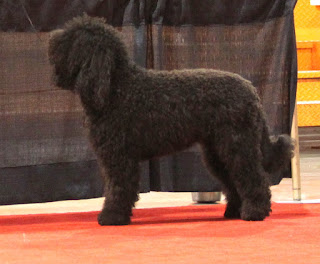 Today Claire went to the veterinarian to have a full check-up and to get her paperwork for flying into Switzerland. Although she is not due in season for a month, I want to have everything in place ahead of time. We will fly from Washington DC so that our flight goes directly into Zurich without having to change planes.

Another thing I've done is purchased a new travel crate for Claire. When I went to the dock diving event at Cabelas a few weeks ago, I saw a one piece heavy duty crate that is much more secure than a Vari-Kennel type of flight crate. I have always been leary of the two-piece, plastic crate, and aluminum flight crates have gotten ridiculously expensive. Ruff Tough custom made a crate for me with ventilation on three sides, as required for International flights. I highly recommend them!  Talk to Doug at Ruff Tough Kennels Although they specialize in selling to hunting dogs and their owners, Doug was incredibly helpful and willing to customize a crate for Claire's needs.
Posted by HTF at 8:45 PM No comments: