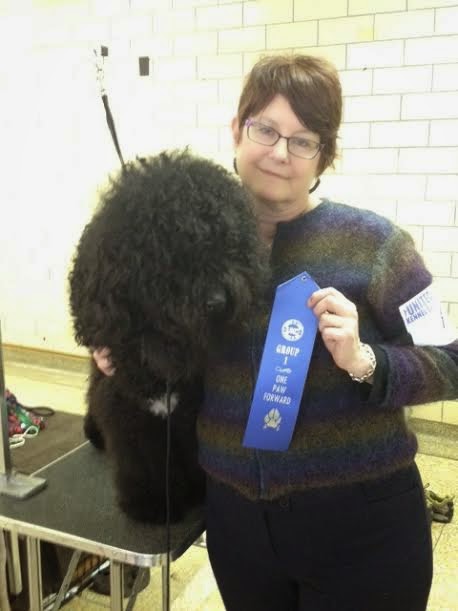 Congratulations to Leslie Woodward and Ch. Hickory Tavern Secret Liaison (Micah) for winning a Group 1 yesterday at the One Paw Forward UKC show in Jackson, MI. Leslie keeps Micah in tip-top condition and he looks beautiful, with a very showy attitude!
Posted by HTF at 9:42 AM 1 comment:

Barbet Puppies on the Way 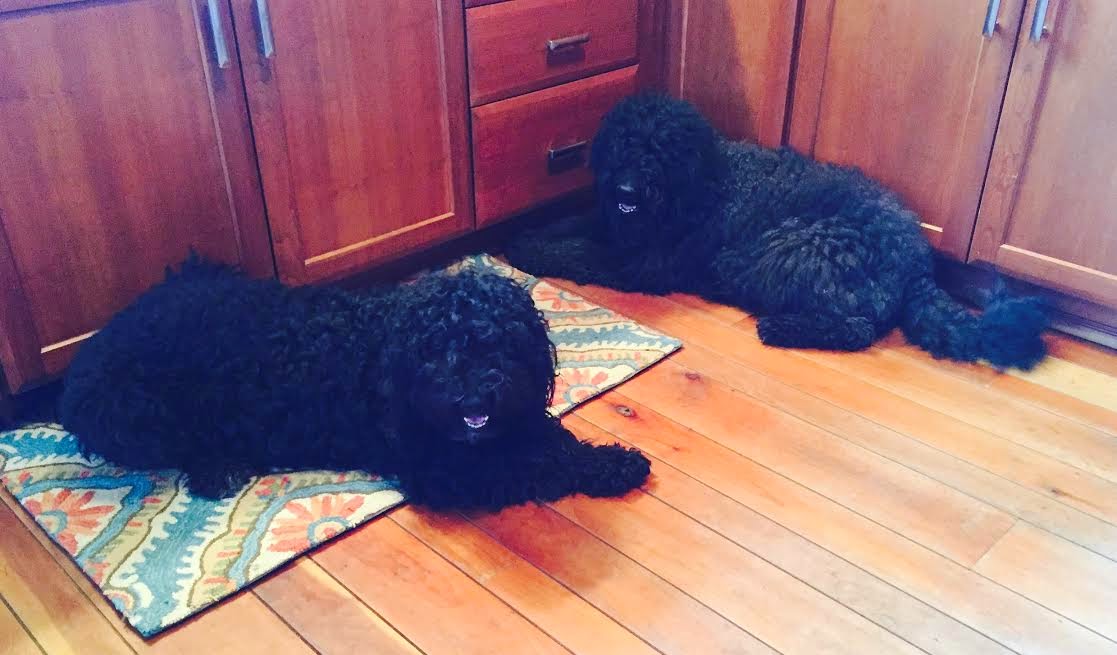 Here are our two expectant mothers, taken this morning after breakfast. Claire (right) is a very maternal girl, and has been acting pregnant and extra snuggly since immediately after the breeding. She is really showing and seems to be carrying a lot of puppies. Nessa (left) has just recently widened and changed in appearance, although her silly, bouncy personality is unchanged. As we approach the end of the month and Nessa's due date, excitement builds for these two Barbet litters!
Posted by HTF at 10:15 AM 1 comment:

Yesterday we had our first truly warm spring day, and we gathered the girls for a quick photo before Marlee goes off to Canada to spend some time with Allison Foley attending CKC dog shows. Since we will be so busy with Claire and Nessa's pups, it is the perfect time for Marlee to spread her wings. We will really miss her goofy antics around our house!

Nessa and Claire continue to blossom, although Nessa has yet to have any realization that things are any different. Claire is already getting quiet large, and she spends extra time sleeping and resting. Soon it will be time to set up the whelping boxes!
Posted by HTF at 3:38 PM 1 comment:

This spring, we're going to be doing something we've never done before--having two litters simultaneously! Claire was to have her final litter last fall, but with the passing of my father, I just wasn't up to it.

In 2015, we planned to breed Nessa, who is almost 3, to Gr Ch Ex Flacon d'Paris of Neigenuveaux CGC for her first litter; and to wrap up Claire's career as a mom with an exciting breeding with Stacy Able's Ch Quaciendas Thunus Georgii. As girls often do, Claire, Ness, and Solene all came into season within 10 days of each other. Timing and other events dictate that both girls were bred in February, and we are now pleased to announce that both girls are safely in whelp and due in the next few weeks. Nessa is due first, around March 31, and Claire is due one week later (April 6).

I drove Nessa to Ontario, where she spent several days with Flo Erwin for multiple breedings with Murdoch. My sister Jan took Claire to Virginia and met with Georgii's family for one quick breeding while she was dropping off her Spinone with her handler. I'm happy that Jan and Nancy, dog breeding novices, were able to successfully supervise the lovely couple.

So, we'll be home for puppy fun in April and May, and ready to hit the shows later this summer!